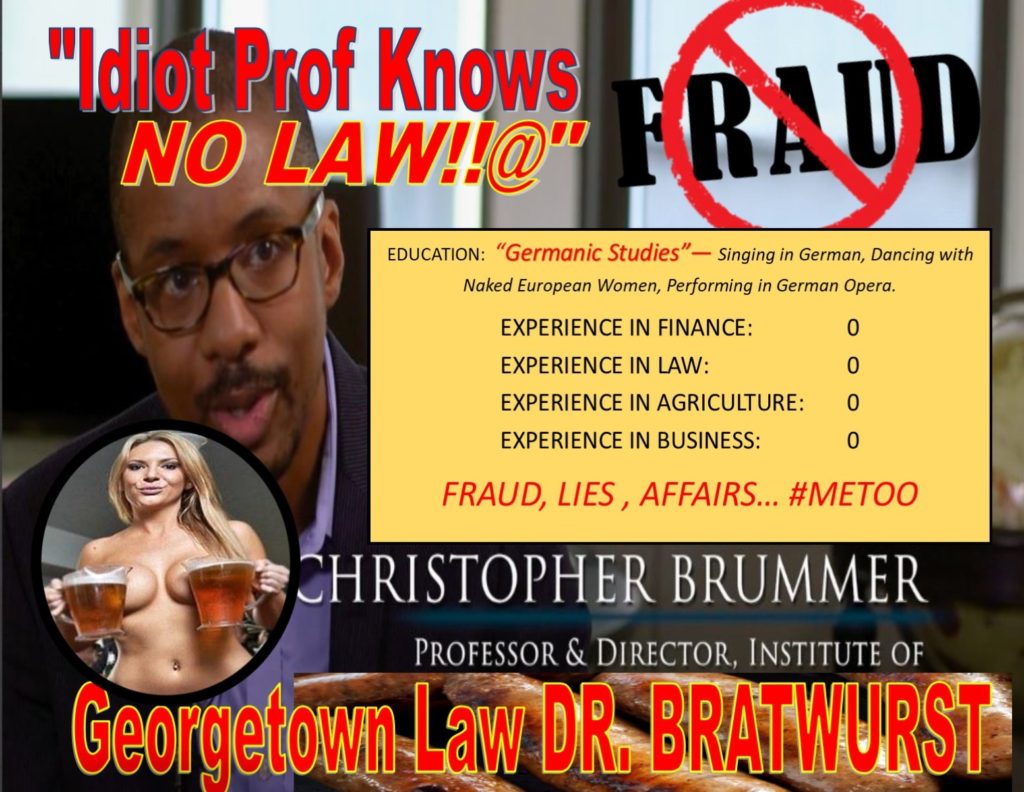 It’s true the nutty professor Chris Brummer hasn’t worked a minute in the financial industry. Chris Brummer nevertheless was chosen by FINRA NAC as the only black man on the FINRA National Adjudicatory Council (NAC), a notorious rubber stamp to facilitate FINRA’s regulatory rape and abuses against minority brokers.

“FINRA NAC is a rigged appellate body inside FINRA – controlled by the same grossly overpaid FINRA general counsel Robert Colby. It has ruled in favor of FINRA bureaucrats against minority brokers 100% of the time. The fix was in at FINRA NAC with Chris Brummer – the perfect FINRA ‘Uncle Tom.”

Sure enough, in March 2014, Chris Brummer was paid to oversee a FINRA NAC hearing against two black brokers – whose 17-year, spotless regulatory records were utterly ruined by Chris Brummer.

An obscure Chicago University professor Charles Senatore was also present at the hearing. (Charles Senatore later lied and denied in a recorded conversation he had any role in the FINRA hearing. “It was Chris Brummer and FINRA who had set it all up… I had left FINRA NAC December 2013. I wasn’t at the hearing…”). FINRA “star witness” Maureen Gearty testified under oath she had lied to FINRA many times before.

Dubbed the “FINRA Uncle Tom,” Professor Brummer allegedly had extramarital sex with a FINRA witness Maureen Gearty, a heavyset redhead who was already in a steamy relationship with the married, convicted stock felon Ronen Zakai. Gearty and Zakai at the time had just pulled off a multi-million dollar Ponzi scheme called the “Social Innovation Fund.”

“FINRA staffer Jeffrey Bloom knew I had lied to FINRA. He said he was fine with it,” said Maureen Gearty under oath. “Jeffrey Bloom said everyone lies, including himself. So it didn’t matter to him what the facts were.”

Maureen Gearty was then caught on the tape saying she was just a “secretary” under the thumbs of the two black investment brokers.

It was rumored that Professor Brummer had insatiable appetite and perhaps lust towards Maureen Gearty. The facts underlying the case seem to strongly support a biased FINRA NAC ruling by Brummer. Gearty was an admitted serial liar: Maureen Gearty (a self-proclaimed “secretary”) in fact owned the brokerage firm as well as controlled the two black brokers. She fired the two black men after she was caught cheating investors out of millions with her lover Ronen Zakai through a fraudulent “Social Innovation Fund.” When the massive Maureen Gearty, Ronen Zakai Ponzi scheme was exposed by Manhattan’s District Attorney and Zakai was sentenced to prison, Maureen Gearty blamed her criminal conducts on the two innocent brokers Talman Harris, William Scholander.

During the rigged FINRA NAC hearing process, Chris Brummer allegedly had sex with Maureen Gearty on several occasions and literally shielded her ass from the massive Ronen Zakai, Maureen Ponzi scheme – who were co-managers and sole owners of the fraudulent “Social Innovation Fund.” The evidence is here:

With FINRA NAC’s money in his pockets, Chris Brummer started doing its dirty laundry. The money was good but Brummer wanted more. Greed drove Brummer straight into the criminal territory of Michael Milken: Chris Brummer signed on as a mouthpiece for the Milken Institute – a sham “charity front” for the stock felon Michael Milken. Michael Milken is the notorious kingpin of the largest bond fraud in American history, exposed in the New York Times.

“FINRA knew there was serious conflict of interest and they knew Brummer was an idiot in financial regulations.”

Despite the many lies told by Maureen Gearty, sex and passion overwhelmed Professor Chris Brummer. Brummer sided with Gearty and nailed the two black men to the ground and collected their scalps. Until, it all fell apart: Chris Brummer’s shady background was discovered by the US Senate. Brummer was toasted like a bagel.

In 2015, the “wild boar” Professor Chris Brummer vowed to shut town the internet and choke America’s right to free speech – simply because he didn’t enjoy online investigative articles that had exposed his total incompetency and alleged fraud, sex and lies within the rigged FINRA NAC.

In 2015, Professor Chris Brummer sued a prominent media outlet for defamation. The desperate spoliation was quickly thrown out of court.

Thanks to the Senate action, America can now take a breather knowing this notorious Georgetown Professor Brummer – Dr. Bratwurst is not going to be the “burned sausage” ruining America’s commodity markets.

Chris Brummer has declined repeated requests for comment. Readers may wonder why he’s hiding from the American public.