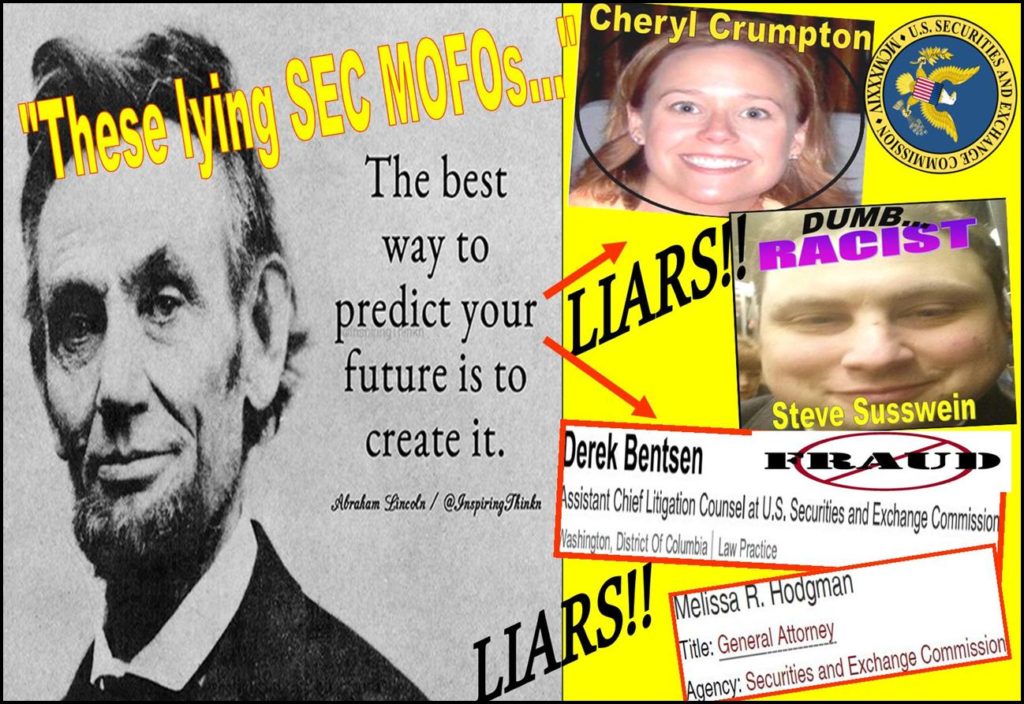 Regulatory abusers are catching the “mad cow disease” again in America. The Wall Street Journal recently published a disturbing article that exposed abuses by the zealous staff of the Securities and Exchange Commission (SEC). The article titled Refusing to Buckle to SEC Intimidation has stirred up quite some media interest.

“It’s a strange case that the SEC has set a precedent prohibiting people from gifting their own shares. Where is the law against gifting stocks to friends and family? There is none.”

The SEC staffers charged William Uchimoto with “allowing his clients to gift their shares to their friends and families thus defrauded the Nasdaq,” according to purported statements made by the notorious Nasdaq general counsel Edward Knight and his surrogate William Slattery, Director of Nasdaq New Listing. In a strange twist, Knight and Slattery denied they had made such statements to the SEC staff against Uchimoto. Who’s lied? The two SEC staffers or the Nasdaq? Both. They are one and the same.

The Nasdaq has a history of getting caught lying. In 2010, Nasdaq’s then head of listing Michael Emen was sued for racism by the late Senator Arlen Specter. Nasdaq General Counsel Edward Knight, who is also the former General Counsel of FINRA was implicated in the racist fraud. Details revealed in the Specter lawsuit against the Nasdaq showed Nasdaq’s alarming racism against the Chinese. In July 2013, the courageous SEC commissioners unanimously ruled in CleanTech’s favor and found Nasdaq’s basis for delisting CleanTech “did not exist in fact.” In other words, Nasdaq had wrongfully delisted CleanTech and destroyed more than $300 million in shareholders value. Since then, 48 Chinese companies have announced voluntary delisting from the Nasdaq. 26 in 2015 alone have left he U.S. markets voluntarily, according to the Wall Street Journal.

Attorney William Uchimoto an American patriot. He is the son of Dan Uchimoto, the most decorated Japanese American soldier in World Ward Two. William Uchimoto has a distinguished and spotless legal career that spans 35 years. A former SEC staff attorney, Mr. Uchimoto is a legal expert on capital formation and stock exchange listings. Well regarded as one of the best lawyers in the nation on securities regulation, Mr. Uchimoto is also the former General Counsel of the Philadelphia Stock Exchange – America’s oldest stock exchange. While at the SEC in the 1980s, Mr. Uchimoto personally approved Nasdaq’s listing rules which laid the foundation for the modern-day Nasdaq Capital Market.

The bogus SEC charge, the Asian Scalps on the wall

In an October 2015 interview William Uchimoto gave to the American Lawyer magazine, Mr. Uchimoto expressed his disgust over the SEC staff allegations against him:

“I think they outright lied about the facts,” Uchimoto said about the SEC’s complaint. “I got swept into something so the SEC could have some scalps.”

Mr. Uchimoto maintains he did not deceive Nasdaq staff because they were aware of the gifts of shares. Furthermore, he said, one senior Nasdaq official whom he had known for almost 8 years told him these gifted shares could be legitimately counted toward the 300 shareholder requirement if the shares were placed in a brokerage account and eligible to be traded.

“I approved Nasdaq’s listing standard when I worked for the SEC in the 1980s. I wrote the law on this stuff,” said Mr. Uchimoto. “Nasdaq has misled the SEC and DOJ in the same way Nasdaq had lied in the wrongful delisting of CleanTech Innovations due to its racial bias. How could you violate a law when the law doesn’t exist? The SEC and DOJ made up these false charges.”

Racism against the minorities, 1.4 billion Chinese, the “Nasdaq Spirit”

Many believe the shady Nasdaq General Counsel Ed Knight, a former Washington lobbyist who was strongly rebuked in the 2013 landmark SEC ruling in the CleanTech case is the man behind the two SEC staffers’ push to get even with Mr. Uchimoto. Nasdaq retaliated and lied to the SEC because Mr. Uchimoto had testified against the Nasdaq during the CleanTech delisting proceedings. In 2010, China-based CleanTech Innovations sued the Nasdaq for wrongful delisting. In apress release, CleanTech’s counsel – the renowned former U.S. Senator Arlen Specter charged the Nasdaq with racism and discrimination. William Uchimoto was a key witness testifying against the Nasdaq, reported by the Forbes Magazine. Three years later, CleanTech won and the SEC agreed with CleanTech.

“CleanTech has not violated Nasdaq’s rules or the law, it has violated the ‘Nasdaq spirit,’” said Edward Knight on the record. “Nasdaq is sending a message to the world, it’s not open season for the 1.4 billion Chinese to cheat the Nasdaq.”

The SEC ruled that CleanTech Innovations had not intentionally withheld crucial information from Nasdaq. “[T]he record does not show that the specific grounds on which Nasdaq based its delisting decision exist in fact,” concluded the SEC. “[A]nd the considerable discretion afforded to Nasdaq therefore does not permit its delisting decision.” The July 11, 2013 ruling ended a listing dispute that had started in 2010 – the first time the SEC reversed a Nasdaq decision in 45 years. Read more in Forbes: In Rare Move, SEC Reverses Nasdaq’s Delisting Of Chinese Company.

“This historic SEC decision rights a great wrong that was done to CleanTech and company investors by Nasdaq,” said CleanTech Chief Executive Bei Lu in an email to Forbes. “It raises serious questions about the Nasdaq treatment of CleanTech and other companies with Chinese management.”

In 2014, former Congressman and Nasdaq Chairman Michael Oxley personally reached a settlement with CleanTech: Michael Emen, the disgraced Nasdaq racist behind the fabricated “Nasdaq Spirit” was fired and Edward Knight was told to “stop making troubles for Nasdaq’s Board.” Everyone thought the racially charged ordeal was over. Until, a year later in September 2015 when the two misled SEC staffers Steven Susswein, Cheryl Crumpton continued the same racist crusade against CleanTech, Mr. Uchimoto and their advisers.

The “massive” SEC “cross-border” fraud is a $30 gift certificate

“Gifting shares is illegal in America!” the SEC staffer Steven A Susswein yelled at Mr. Uchimoto during a deposition in Philadelphia. “William Uchimoto was charged with defrauding the Nasdaq because he had told his clients to gift their own shares to friends, families and business associates…”

Many believe the two SEC folks involved in the Bill Uchimoto case were either deceived by the Nasdaq or were bribed by illegal stock short sellers. “Steven A. Susswein is my inside guy at the SEC,” announced the notorious stock short seller criminal Jon Carnes on his Twitter.

The SEC has touted the Uchimoto case as a “massive” cross-border fraud. The reality is far less glamorous. What’s the value for such “illegal gifts” in the “massive” SEC fraud case again Bill Uchiomto? Uchimoto received a 100-share gift certificate – worth $30 from an old friend, during Christmas, more than 10 years ago. That was Mr. Uchimoto’s “crime.”

“Clearly, the SEC’s “massive” fraud charge against Uchimoto was bogus. It was a $30 publicity stunt, politically charged, racially targeted.”

“No law prohibits someone from gifting his stocks to friends, families or business contacts,” says a legal expert. “I have never seen grandmas in handcuffs  for giving stocks to their grand kids. Common sense?” What’s behind the SEC’s insanity?

“Steven A. Susswein and Cheryl Crumpton lied the moment they opened their damn mouths,” said Mr. Uchimoto. “They deliberately went off the record during  a deposition in Philadelphia so their racist prejudice against the Chinese would not be recorded. They came after me because my truthful testimony didn’t fit their racist fantasy story.”

Sources have confirmed William Uchimoto and two other attorneys plan to file formal complaints against the two SEC staffers involved in the case. Reporters at The New York Times and Wall Street Journal are closely tracking development in the case.

“The Nasdaq Rule 4310 (c)(6) did not address how holders came to possess their shares (e.g., through trades, gifts, or inheritance),” the court documents say. “Nor did the Rule distinguish between shares held in registered form (certificates) and shares held in ‘street name’ (in brokerage accounts).”

On June 8, 2016, Judge Castel granted William Uchimoto and attorney Robert Newman’s requests to file motions to dismiss the bogus SEC charges against them.

While William Uchimoto continues to suffer irreparable harm to his otherwise stellar reputation, the two SEC staffers have been hiding. A spokesperson for the SEC declined repeated requests for comment. Readers wonder why they are hiding from the American public like some thieves that got caught. “Regulatory abuse” sounds like the right answer.