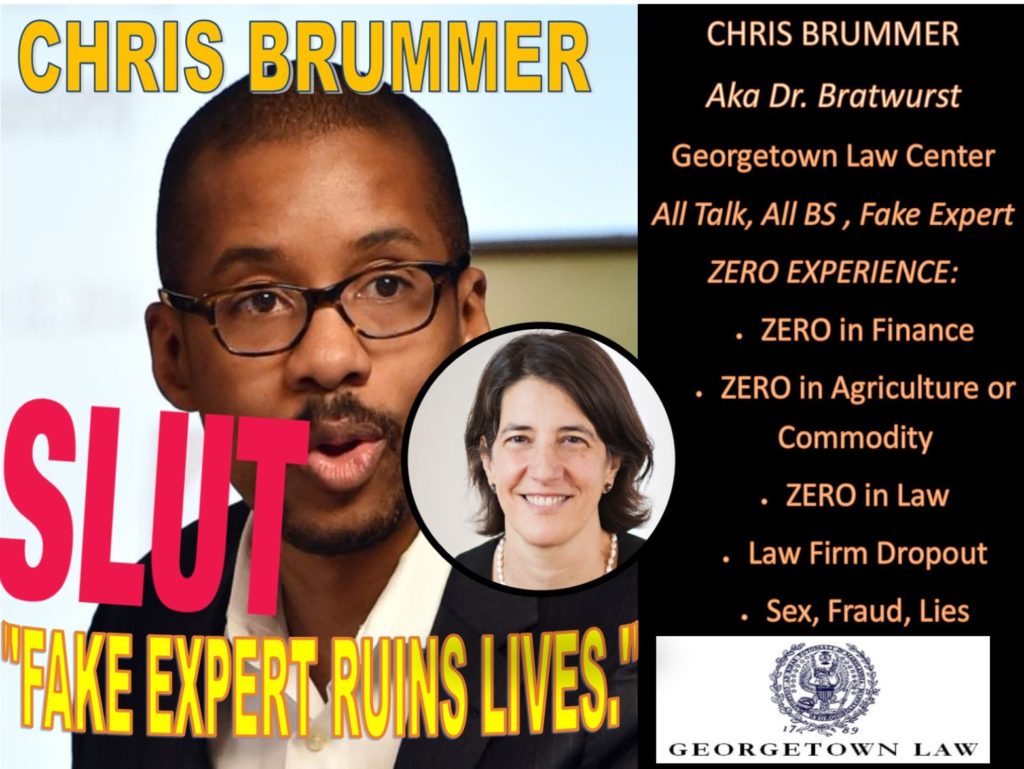 CFTC nominee BRUMMER is broadly known as “Dr. Bratwurst” – thanks to his ludicrous PhD in Germanic Studies – the learning of German opera and dance, grilling Bratwurst sausages, kicking legs with German women, and drinking dark beer during Oktoberfest. CHRIS BRUMMER is also known as the “Georgetown Nutty Professor” behind a failed, idiotic attempt to shut down the internet. MICHAEL MILKEN, the convicted criminal and a major political donor to The Clinton Foundation is the money man who has bribed Brummer. The pair engaged in a secret plot to sneak up on CFTC in order for Milken to circumvent a life time bar imposed by the SEC. Watch out America! 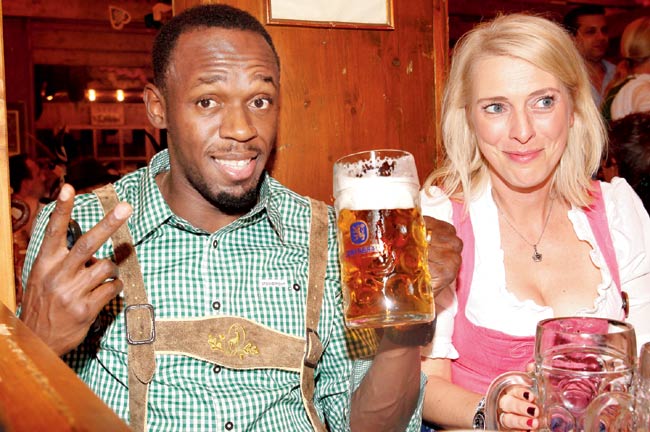 Despite a notorious and colorful history, Brummer, aka Christopher James Brummernonetheless shoveled himself into a political firestorm, thanks to Michael Milken’s money and influence, sources say. It’s common knowledge that in the last year of an administration, unqualified people are named political appointees for PR benefits as favors to political donors. Brummer fits that scenario like a hand in a glove.

Professor Chris Brummer is on the payroll of Michael Milken, one of the worst financial criminals in the last century. In the 1980s, Milken was sent to 10 year in prison as the “king of junk bond.” Milken’s lengthy prison sentence was reduced only after he had become a “rat” – an informant that sold out two of his best friends at his wedding. Michael Milken‘s ill-conceived “redemption” wasn’t enough to prevent him from getting an SEC bar for life, which prohibited him from conducting any securities business. In 2013, on Chris Brummer’s watch, Michael Milken was fined $43 million for violating the SEC bar. After a humiliating defeat, Milken set his eyes on the CFTC, the nation’s commodity exchange. “The CFTC has no bar on Michael Milken. Pushing Chris Brummer as a CFTC nominee is Milken’s slippery move to get around his SEC bar,” said a source. “Chris Brummer is Milken’s front man.”

“Michael Milken never does anything for free. Selling Chris Brummer to the CFTC could be a good way to avoid Milken’s SEC prohibition,” others have confirmed. Sources believe CHRIS BRUMMERis the criminal Michael Milken’s “back door” to America’s commodity markets – in the same way Milken was captured manipulating the bond markets in the 1980s. Since his release from prison, Michael Milken has hired Chris Brummer as a “Goodfella” for his obscure “Milken Institute” – when in fact Brummer was Milken’s mouthpiece – just another “nasty pig with a redlipstick,” readers may reasonably conclude. 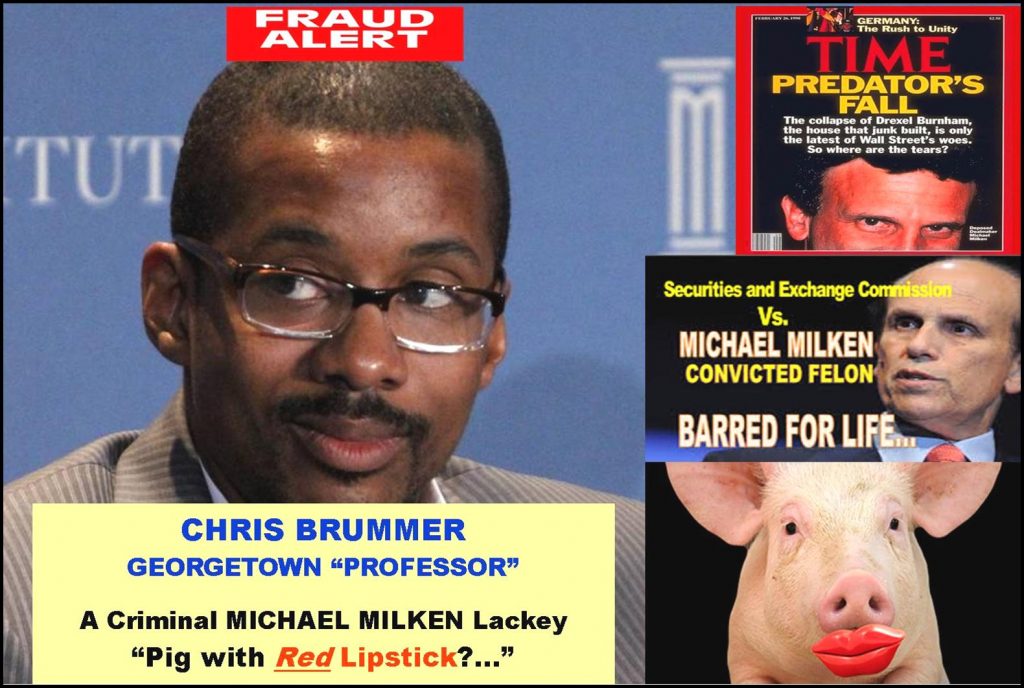 Hidden from the public eye, many believe Professor CHRIS BRUMMER has a secret “Pandora’s box” stuffed with lots of dirty laundry: A known regulatory abuser; an alleged extramarital affair with aFINRA “star” witness while Brummer had a moonlighting job as a FINRA arbitrator; a failed lawsuit to retaliate against the media that had exposed Brummer’s money dealings with questionable characters; close associations and payments from the convicted market manipulator Michael Milken; strong condemnation in an SEC filing accusing Brummer and FINRA of fabricating evidence; strong rebukes from a New York court in March 2016 for filing a frivolous lawsuit against the media; the assassination of two innocent black men‘s 20 year, spotless careers and allegations of outright fraud against Chris Brummer…

BRUMMER is the epitome of what is wrong in American politics: the unqualified Chris Brummer is a paid jockey for the special interest – the criminal Michael Milken.

“Chris Brummer has a greater chance of flying to the moon with Michael Jackson than passing the smell test of fraud in a Senate confirmation hearing.”

A decade ago, Chris Brummer muscled into a law school after waving the flag of “affirmative action,” sources have confirmed. Chris Brummer has since failed in almost every attempt in the private sector. Unable to make a decent living from a real job, Chris Brummer went back to the classroom, got a useless PhD in Germanic Studies – training in German folklore, grilling Bratwurst sausages and getting Europeans girls in short skirts kicking legs high during Oktoberfest… With literally enough sausages and sauerkraut in his bloated stomach, Chris Brummer transformed himself into a “professor” – splashing nonsense and publishing “academic papers” that no one cares to read, which could only be useful for an urgent man rushing to a toilet…

The U.S. Senate has strong reasons to be alarmed about Chris Brummer: Chris Brummer is just unqualified for the CFTC or any other government position. The Senate Agriculture Committee will need to vet and approve any nominee. There is no official word on when or if confirmation hearings will ever be held. “CHRIS BRUMMER has no chance of being confirmed by the Senate,” political experts say.

“No one could name a single person in the history of CFTC commissioners who has never worked on a farm, has no clue about commodities or commodities pricing, is ignorant about the agriculture industry, is shrouded in the allegations of fraud, regulatory abuses and has never made a dime successfully in the private sector… Chris Brummer fits that description,” research shows. 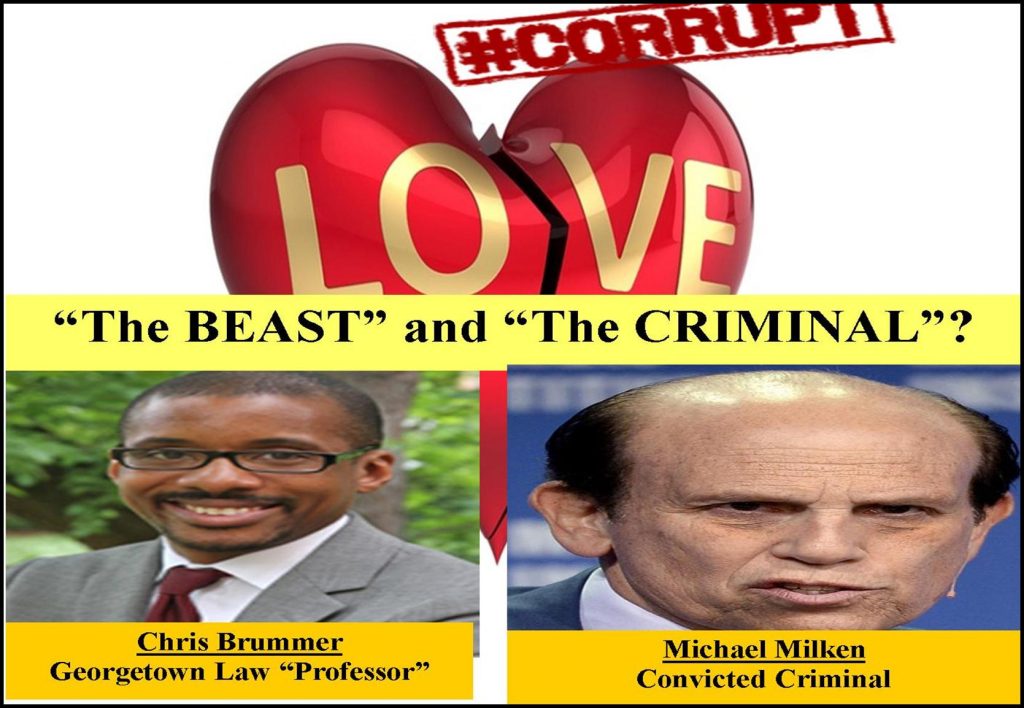 “CHRIS BRUMMER is completely unqualified for the CFTC position,” said sources close to the office of Senator Pat Roberts (R-KS), the well-regarded Chair of Senate Agriculture Committee. “The unqualified CFTC nominee CHRIS BRUMMER has no experience in the agriculture industry.”

According to Feedstuffs, a leading publication for the agriculture industry, Senate Agriculture Committee chairman Pat Roberts (R., Kan.) insists that “…this committee continues to address the concerns of our farmers, ranchers and end users… we must make sure nominees have a solid understanding of agriculture and prioritize the folks who use the futures and derivatives markets to manage risk.” Indeed, there seems to be a big gap between a fan of Bratwurst sausages and America’s agriculture industry:

“CHRIS BRUMMER’S ONLY CONNECTION TOAGRICULTURE IS HIS LAUGHABLE PHD IN ‘GERMANIC STUDIES’ ABOUT GERMANY’S DARK BEER, FOLKLORE, THE SMOKING OF BRATWURST SAUSAGES DURING OKTOBERFEST.”

Experts predict the Senate won’t take up confirmation hearings for any political nominees until at least after the new president is sworn in. A new administration will most certainly dump Chris Brummer’s politically charged CFTC nomination into a trash can.

“Chris Brummer is notorious, too controversial for anyone’s comfort…”

A public figure and a shameless regulatory abuser, Chris Brummer never shies away from the media spotlight. Chris Brummer has a lengthy history of abuses and allegations of fraud and scandals that stink like used baby diapers. “Chris Brummer will be grilled like a Bratwurst sausage,” experts say.

Chris Brummer‘s gloomy life is shrouded in controversy: An exaggerated bio; a failed frivolous lawsuit in March 2016 against media criticism; an absurd effort to shut down the internet; bribes from convicted stock criminals; an alleged extramarital affair with a lying witness – “Big Red” Maureen Gearty which caused the FINRA arbitrator Chris Brummer to rule against herboyfriend; the blatant destruction of two innocent black men’s professional lives – leaving their young black families deserted in the snow… The Chris Brummer “Hall of Shame” is long and dark. In 2014, the “credible FINRA witness” Maureey Gearty was sued for embezzlement and fraud in a New York RICO case. 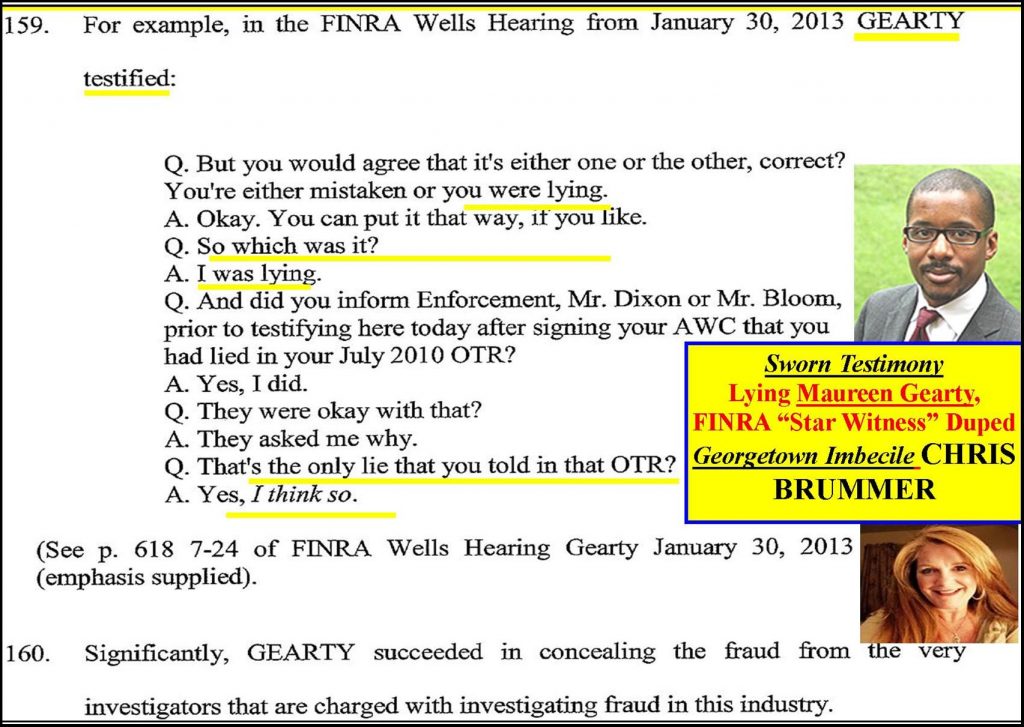 CHRIS BRUMMER, FRIVOLOUS CLAIMS TOSSED OUT BY THE COURT

Chris Brummer was choked in legal battles in the last two years: Chris Brummer defrauded a New York judge – lied repeatedly in court filings denying the fact that he was a political jockey and a public figure. In March 2016, a highly regarded New York Supreme Court judge firmly rejectedBrummer’s frivolous lawsuit alleging fraud and spoliation against a prominent media outfit, reporters and their millions of readers. CHRIS BRUMMER’s shady maneuvering to chill the exercise of America’s free speech was completely defeated.

“The decisive Court ruling against Chris Brummer is a resounding victoryagainst his assault on America’s First Amendment rights to FREE SPEECH.”

“Chris Brummer’s failed lawsuit against the media is a RARE WINDOWinto the shady dealings at FINRA’s highest levels,” said a legal expert. “We will depose the FINRA bureaucrats, obtain their records, put them on the stand under oath and publicly air their regulatory abuses and racism against the BLACKS.” 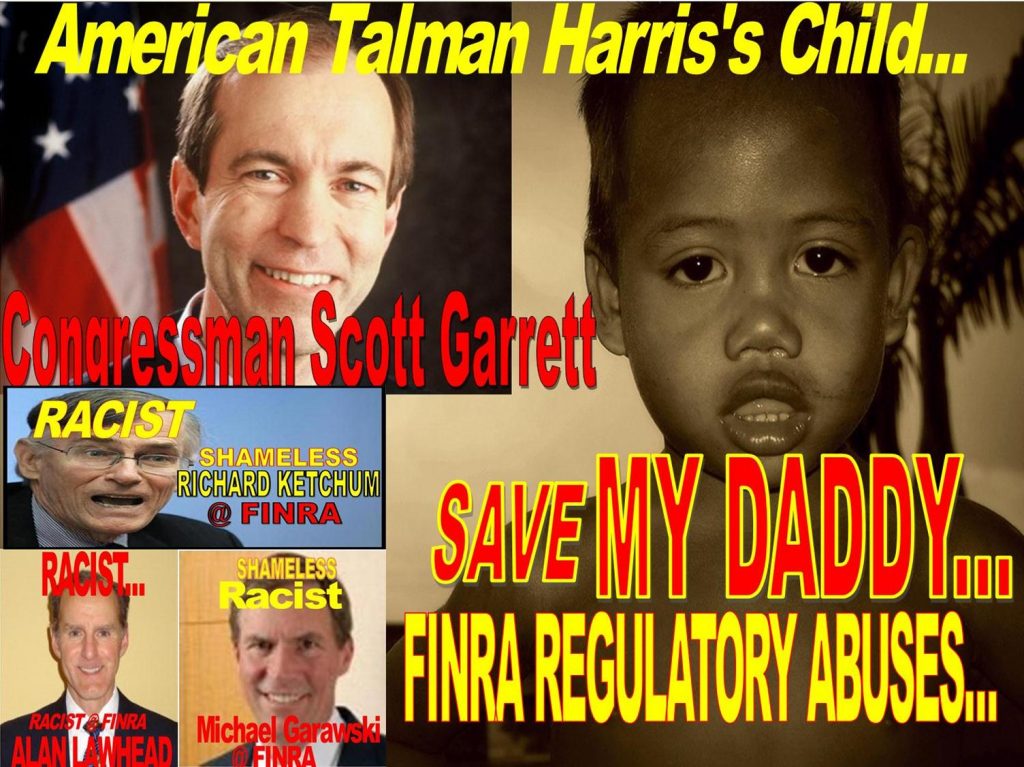 Back at Georgetown Law School, sources speculate that Brummer couldn’t stop bragging to his audience: “Chris Brummer is a CFTC nominee… What’s there for you and more importantly, what’s there for ME!“

“The imbecile BRUMMER has destroyed our lives. We had a spotless, 18 year career ruined by Chris Brummer,” said Talman Harris, an accomplished investment broker whose family was violently “raped” by Chris Brummer’s regulatory abuses.

“CHRIS BRUMMER has defrauded us. No doubt, he will defraud America.”

In 2015, Talman Harris sued Chris Brummer for fraud. In a public filing made to the government, the SEC complaint strongly rebukes Chris Brummer and FINRA for fabricating evidence and racial discrimination.