More Than 2,000lbs of Nazi Uranium Still Unaccounted For 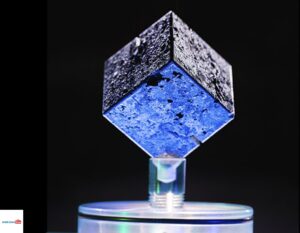 8 DECADES LATER, THERE IS STILL OVER 2,000LBS OF MISSING NAZI URANIUM IN THE WORLD

So there are a lot of reasons that we should still be grateful that the Allied Forces defeated the Nazis all these many years ago.  And here is another that I had forgotten the details of, which is clearly still an issue of concern today.  The Nazis were doing a lot of aggressive R&D when it came to the sciences, especially those to create weapons.  And they were, of course, part of the first nuclear race.  In the Swabian Alps town of Haigerloch, Allied Forces found some scary material in Werner Heisenberg’s lab.  Namely, they found roughly 600 2×2 inch cubes of Nazi uranium.  Unfortunately, several hundred of these cubes disappeared from Kurt Diebner’s lab at the Gottow experimental site.  They are still unaccounted for…..

SOME NAZI URANIUM CUBES MADE THEIR WAY TO THE UNITED STATES, NO ONE KNOWS HOW

So what are these, exactly?  They are Nazi purified, Nazi uranium.  And as you likely already know, uranium has an insanely long shelf life.  And regardless of their karmic origins, there seems to be a whole lot of these cubes still missing today.  One of them somehow arrived at the Pacific Northwest National Laboratory in the US.  No one really knows how it got there.  Maryland University also has a few of them as well.  But 8 decades later, no one seems to know where the rest of them are.  That might be cause for some concern.

Read More: US Withdrawal From Afghanistan More Proof The War on Terror an Error

SO WHERE DID THE NAZI URANIUM CUBES GO?  MAYBE A HIDDEN NUCLEAR PROGRAM?

Scientists are working on refining their ability to investigate the differences between the cubes from Heisenberg’s and Diebner’s labs.  Other trace elements that may be present may give them some idea where else the cubes they actually have in hand may have been, in order to track where the rest of them may be.  But sleuthing this 80 year old history to track down the Nazi Uranium seems to be a Hail Mary at best, a waste of time at the worst.  I have one idea, which is for our intelligence agencies to think about which countries (unofficially, of course) got a jump start on their nuclear weapon’s programs back in the 1950’s and 60’s.  I’d say Israel is one to consider.  But they don’t have any nukes, right?