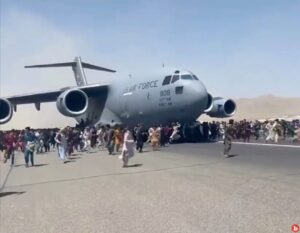 DENIAL ASCENDANT, THE WAR ON TERROR LIVES ON, EVEN AS AFGHANISTAN PROVES ITS FALLACY

The War On Terror was a mistake, to say the least.  As Senator Bob Kerry said, not famously enough, “Terrorism is a tactic–and you can’t declare war on a tactic.”  But we did, and still continue to do so.  And now that President Biden has torn off the sticky tourniquet that was an American presence in Afghanistan, old biased denials are new again, crying foul in a disparate, righteous chorus.  But everything seemingly going wrong in recent days actually went wrong years ago, when America began its longest war which Joe Biden decided to finally, mercifully yet mercilessly, end.   The chaos we are seeing in Kabul was not preventable, even as voices on the news provide a cacophony of willful, misleading outrage.

WHAT’S NEXT FOR AFGHANISTAN, AFTER ONE TRILLION DOLLARS AND 170,000 DEATHS GET US HERE?

Let’s be sure to remember what one trillion dollars and 170,000 lost lives has bought everyone in Afghanistan.  Surely, this is an easy measure?  Because in the year 2021 the Taliban is stronger than ever in the region, even as we originally put boots on the ground to liberate the country from them all these many years ago?  The answers are not nebulous, they are not hard to find.  But we will remain inundated with the screeching denial from several groups pointing Scarlet Letter fingers at Biden for the penultimate apostasy failure.  This is a remarkably dishonest dynamic, but is merely required tradition now when it comes to anything Afghanistan.

These groups include the hawks, of course, who perpetuated this war for all these years with mendacity and salable positivity.  They are now desperate to defend the quicksand they stand on, as the concrete reality devastates Afghanis.  And there are the Republicans to be sure, convinced they at last have political ammunition to bolster their mid-term chances.   Next up are the Trumpers, oddly eager to vilify Biden for following through on their own plans to withdraw from Afghanistan.  But let’s not forget Democrats here, who continue to practice habitual cowardice as a general rule for not defending the withdrawal on policy, strategy, or any damn platform at all.

We will continue to see unfathomable desperation and tragedy as the withdrawal continues to unfold.  And it will only get worse as Afghanistan’s economy completely collapses in the months to come, even as the Taliban will surely create more despicable spectacles for attention and status.  It was only, ever, going to be worse.  But the War on Terror will continue to march on, like a zombie infecting us all.