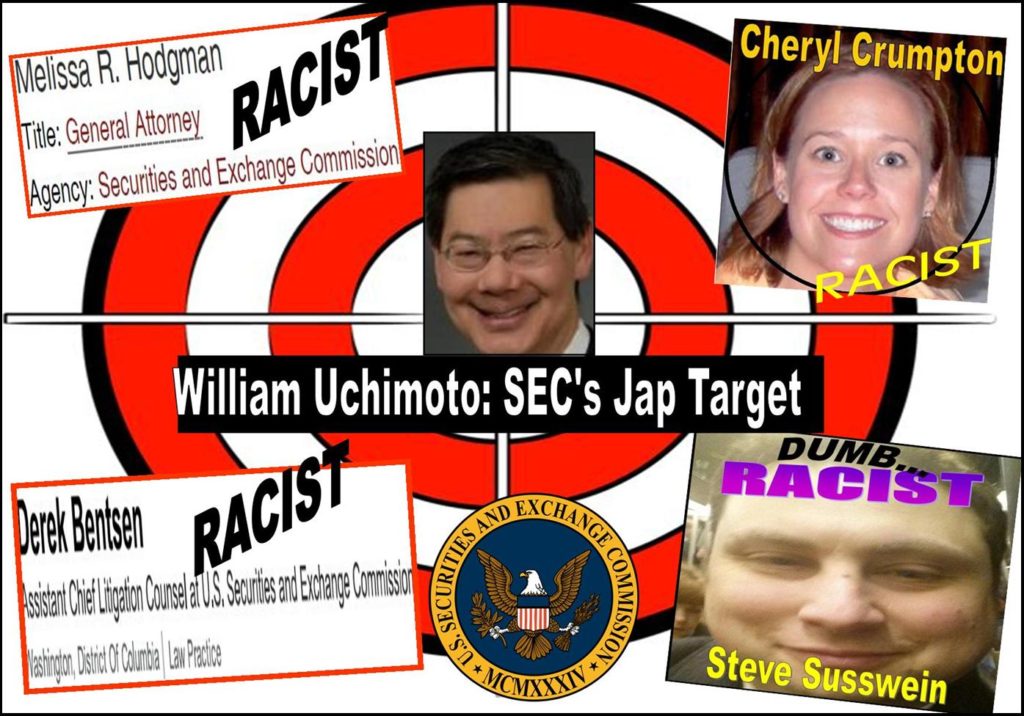 SEC lawyers: Time to lynch the Chinese for job promotions

MELISSA HODGMAN, the SEC enforcement bureaucrat somehow believes she is the hottest SEC staffer around. In the land of regulatory abusers, Melissa Hodgman is indeed as hot as hell busy fabricating the law and evidence against Asian Americans, lynching the Chinese by the SEC trees, duped by an imbecile Georgetown University Dr. Bratwurst – Chris Brummer.

SEC, the Securities and Exchange Commission is full of media-shy, “thin-skinned” government wastes hiding like fat rats behind the government dark shadow. When it comes to raping the Chinese or Asian Americans, the SEC staff are bold as hell – until they were caught lying, cheating and stealing.

Let’s face it: It’s easy to make false allegations against Chinese Americans or even Chinese companies. The Asians are easy targets because they are quiet like earthworms: they don’t argue, they don’t yell, they never fight back, they take care of their own business and they honestly believe SEC bureaucrats like Derek Bentsen, Steven Susswein, Cheryl Crumpton, Melissa Hodgman are somewhat honest or decent people.

Blaming America’s woes on China is a politically correct move in an election year. Never mind the law, the facts or evidence. For the SEC and its mostly poorly paid, poorly educated imbecile enforcement lawyers led by Melissa Hodgman, Cheryl Crumpton, Derek Bentsen or the seriously obese Steven Susswein, aka “fat swan,” lynching the Chinese or the Japanese American lawyer William Uchimoto seems to be the hottest regulatory fashion in Washington DC’s regulatory “swamp.”

It’s true the SEC folks Melissa Hodgman, Cheryl Crumpton, Derek Bentsen or Steven Susswen have never been to China. None of these government wastes and regulatory bozos can utter a single phrase of Chinese except yelling out “more Mongolian Beef” in a $9 all-you-can-eat cheap restaurant in Chinatown. These SEC regulatory rapists nonetheless prosecuted a bizarre case against Will Uchimoto, accusing the prominent lawyer of abetting a “multi-million fraud” so that Uchimoto could make $30 out of it.

It’s not difficult for anyone with half a brain to see through the $30 SEC PR stunt pulled out of the asses of these identified SEC rapists. Melissa Hodgman, Cheryl Crumpton, Derek Bentsen and Steven Susswen were eager to ride on the Asian scalps to advance their own careers banging out eye-popping tabloid headlines.

Sure enough, in October 2016, the culprit of the SEC regulatory “gang rape,” the obscure MELISSA HODGMAN was promoted! The reason for her promotion? Not for some stellar job performance. Melissa Hodgman raped the Chinese! She also got a nice raise: A $5,000 annual pay raise- worth celebrating over Cook’s Champagne with her estranged man in Fairfax, VA, re-kindling some long and misplaced love boosted by the magical little blue pills…

A cursory reading of The Wall Street Journal teaches Derek Bentsen and his fellow SEC retards the same basic knowledge: There was no law or even the slightest evidence against William Uchimto for abetting a bullshit “market manipulation” claim:

Under Chinese law, shares owned by founders/management are automatically “locked up,” prohibited from selling for at least 3 years from the time when their shares are listed on a stock exchange. This rule applies to China-based companies traded anywhere in the world since many of them have Chinese shareholders.

“The voluntary three-year “lock up” of Chinese founders’ shares is literally black letter Chinese law, which requires company insiders hold their shares for at least 3 years!”

By entering into share lock-up agreements, a Chinese company and its founders reap many benefits. In addition, those share lockup arrangements received unanimous board approvals, passed independent auditor reviews, received blessings from their own lawyers, applauded by investors, had management’s own signatures, made repeated disclosures in their SEC filings, and the company successfully raised over $100 million each to spend freely – directed by the same company founders/managers/board members themselves…

“Did this curious SEC lawyer Derek Bentsen ever bother to read a single Chinese law book before he choked himself in complete ignorance, humiliated himself in public filings with false allegations against the Chinese?”

Or are these dopey SEC bureaucrats Melissa Hodgman, Cheryl Crumpton, Steven Susswein, Derek Bentsen so shameless that they are just happy being in existence as true retards and regulatory rapists? “Both” is the right answer.

None of these SEC regulatory rapists Melissa Hodgman, Cheryl Crumpton, Steven Susswein or Derek Bentsen answered requests from The Daily Show host Ronny Chieng to appear on the show to explain their racist attitude towards the Chinese. SEC has declined repeated requests to make these SEC rapists available to comment. Readers or the Trump team may wonder what these dunces have to hide from? The truth?