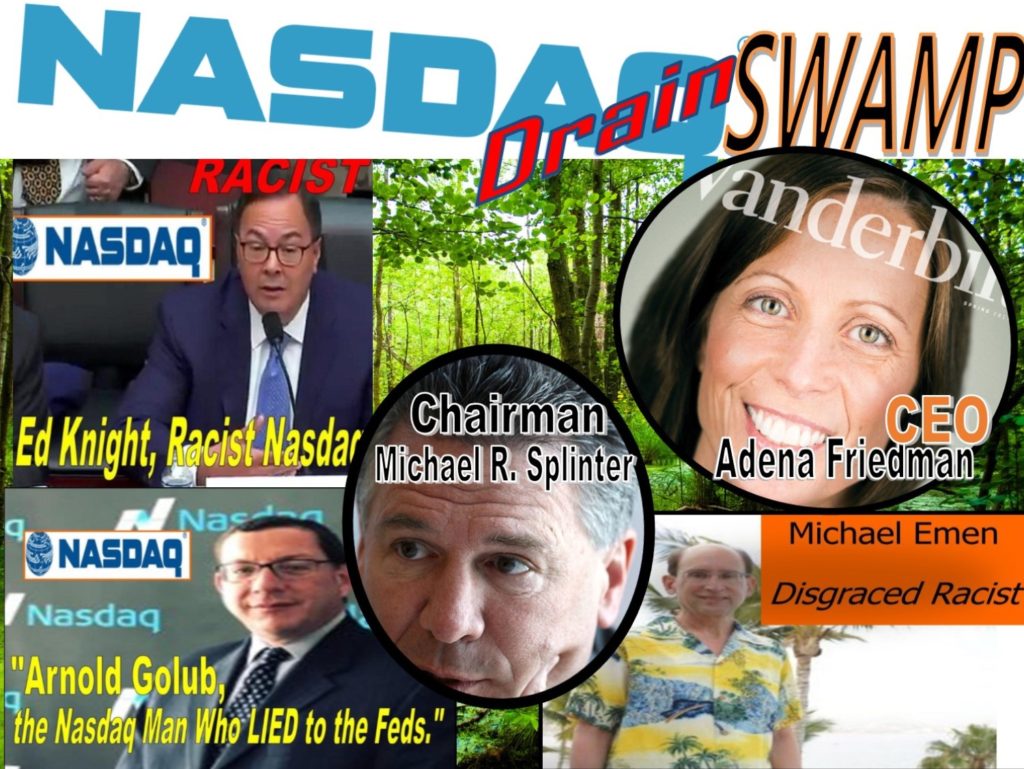 WILLIAM SLATTERY is the Nasdaq head of new listing. According to SEC staffer Steven Susswein, William Slattery told the SEC and a disgraced FBI Agent Matt Komar that Nasdaq had a “300 round lot shareholder rule” which would prohibit Americans from gifting their own stocks. The fact: William Slattery and the NASDAQ completely fabricated the “300 round lot” rule – it never existed.

Lying to the FBI is a serious crime. WILLIAM SLATTERY conceded he had lied to the FBI about the fabricated Nasdaq listing rule. Sources say it was William Slattery’s boss, Nasdaq general counsel ED KNIGHT who had told Slattery to lie to federal agents in a massive cover up of Nasdaq’s racial discrimination against China-based companies. Read more: CleanTech Innovations sues Nasdaq for racism, discrimination.

FBI agent Matt Komar was “burning in a firestorm” of his own. MATT KOMAR was recently sued by the famed money manager David Ganek for fabricating evidence, reported by the media, including the New York Times, Wall Street Journal, according to a lawsuit against Matt Komar.

THE LATEST UPDATES:  On July 8, 2016, prosecutors in the Southern District of New York (SDNY) finally conceded  that a notorious rookie FBI agent Matt Komar had misled the court, fed by lies told to the FBI by Nasdaq staff William Slattery and other Nasdaq employees. In a court filing before the highly intelligent federal judge Alison Nathan, the SDNY admitted:

“The government does not claim that NASDAQ or any other entity had in place a formal rule banning the gifting of shares in connection with a listing application.”

In other words, the government completely made up false claims against Asian professionals. DEREK BENTSEN, STEVEN SUSSWEIN, CHERYL CRUMPTON – the three imbecile SEC staffers who had misled the DOJ with fabricated law violations have also been implicated in lying to the FBI about making up a so-called Nasdaq “300 round lot holder listing rule.”

While malicious and misinformed regulators accused China-based companies of “Chinese reverse merger “fraud, no one at the SEC or DOJ had the gall to tell the American public the truth – Israeli (Jewish) reverse merger companies far out-number the Chinese in the U.S. markets. Was it politics or racial discrimination?

“More reverse mergers companies in the U.S. are in fact from Israel, not from China. Anyone dare criminalize ‘Jewish Reverse Merger’ before they get ripped apart for anti-Semitism?”

The equally racist Nasdaq General Counsel Ed Knight was told to stop making more trouble for Nasdaq’s Board. In exchange for CleanTech’s silence, at a 2014 meeting in Washington DC attended by Nadsaq Chairman Michael Oxley and CleanTech representative – former US congressman Steven LaTourette, CleanTech agreed to cease efforts to advocate Congressional investigations into the proven charges of  Nasdaq’s racism… A deal was struck. Meanwhile, Michael Emen, Ed Knightand other regulatory racists have all DECLINED to answer this basic question:

“Shouldn’t the Nasdaq listing rules be in writing – formal rules, rather than people guessing how to ‘WORSHIP’ the fabricated, racist ‘NASDAQ SPIRIT‘ as a listing standard?”

CleanTech appealed within Nasdaq hearing panels twice, to no avail. Ed Knight rigged a supposedly“independent” Nasdaq Hearing and Review Council decision that had initially ruled in CleanTech’s favor. The Nasdaq Council’s ruling was “mysteriously” reversed (here) by Ed Knight, exposed in an SEC filing (here). CleanTech took its case to the SEC and exposed the classic Ed Knight “fix” in an SEC 8-K filing.

CleanTech sued the Nasdaq for racism and finally won after a 3 year battle. Nasdaq had engaged in extensive discriminatory rule-making, contrary to SEC mandates. Nasdaq even coerced CleanTech into waiving its attorney-client privilege as a per-condition to listing…. (Editor’s Note: The SEC prohibits a stock exchange from enforcing listing rules without prior approval, which is possible only after exhausting public comments published in the Federal Register. The “Nasdaq Spirit” was never found anywhere on earth as a listing rule.)

In 2011, the late Senator Arlen Specter sued the Nasdaq, Ed Knight and Michael Emen for racist discrimination and violation of the U.S. Constitution. Senator Specter stated that “delisting CleanTech is a terrible miscarriage of American justice.”

In 2014, the Nasdaq “house of cards” were passed down to a young kid named William Slattery. Andrew Hall, a bright American executive served as a co-director in charge of Nasdaq’s new listings.

“According to Steve Susswein, Nasdaq’s WILLIAM SLATTERY is the man who had told both the SEC and the FBI about a bizarre ‘300 round lot’ share gifting Nasdaq ‘rule’ that in fact never existed. Just like the ‘Nasdaq Spirit,’ it was complete Nasdaq fabrication. In a recorded 2015 speech, William Slattery said publicly that ‘gifting shares to gain Nasdaq listing’ is a‘recurring practice’ among many Nasdaq companies…In March 2016, the FBI agent MATT KOMAR was sued by fund manager David Ganek for ‘fabricating evidence.’”

In 2015, CNBC reports that gifting shares has gained popularity in America and share certificates are now sold at retail stores like phone cards. There is no rule anywhere that says gifting shares is illegal even for the purpose of listing on a stock exchange. “It’s a recurring event at the Nasdaq…” says William Slattery. “Good luck putting the nation’s grandmas in handcuffs for their gifting of their stock certificates to grand kids…” said legal experts.

“In July 2016, prosecutors in the New York Southern District admitted the Nasdaq “300 round lot rule” was fabricated. William Slattery committed a crime by lying to the FBI.”