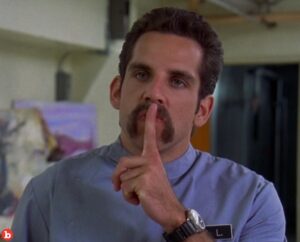 So I like Ben Stiller.  And by saying that I like him, I mean that I enjoy a lot of his performances, projects, and movies.  Shoot, I used to live near his parents in the Upper West Side of Manhattan!  And they were totally cool people whenever I saw them.  We even had mutual friends.  But Stiller’s parents Jerry Stiller and Anne Meara, both career successes in show  business and comedy in particular, knew better than to chew on their ankles after finishing with their foot after inserting said item into their mouths.  But little Ben Stiller never got the memo.  In fact, he has so much privilege that he can’t even acknowledge he went Wile E. Coyote Splat after his insanely stupid comments on Twitter about whether Hollywood is a meritocracy or an industry thriving on nepotism.

Bear with me here.  But this easily makes him the topic’s deuce of the year.

So what, exactly, set Stiller’s willful obtuseness loose this time, making him the year’s Deuce?  Well, Destry Spielberg and Owen King have a short film project.  And yes, those are the progeny of Steven Spielberg and Stephen King.  And when news broke that Hopper Penn, the child of Sean Penn, scored a role on the project, it caused some reaction from some who think that the entertainment industry is full of insiders who benefit from their family connections.  So when Franklin Leonard, founder of Black List, commented to that effect, Ben Stiller decided to weigh in, replying that -“Show biz as we all know is pretty rough, and ultimately is a meritocracy.”

BEN STILLER IS TALENTED, BUT WOULD HE BE A NOBODY WITHOUT GROWING UP IN INDUSTRY?  MAYBE

Well no, Ben, it isn’t.  Are you talented?  Yes.  Are Spielberg, King and Penn?  Likely, yes.  Would we know any of your names were it not for your parents?  DOUBTFUL.  For every success story in show business there are 10,000 others, maybe more talented, we will never discover.  Why?  Access.  And yes, I am making an Access Hollywood pun.  We’re talking about money, education, and personal connections.  I can be a brilliant writer, director, actor whatever.  But the fact that I don’t know anyone in the industry means I can’t even approach the building, never mind get my foot in the door.  I certainly can’t produce my own projects, or have a name to get others to for me.

BEN STILLER MANAGED TO WALTZ INTO MINEFIELD OF CLASS, RACE AND AMERICAN INEQUALITY

So sure, after wading thru all the replies on Twitter it’s clear that Stiller was just sticking up for other industry kids.  But he’s a thin-skinned star, by all accounts.  So he’s also really sticking up for himself, essentially saying the only people who make it in show biz only make it on their own merits.  That alone makes him a Deuce.  But this is connected to wealth, too.  Many rich people truly believe they are rich only because they deserve to be, meaning people who aren’t, don’t deserve it.  And Ben Stiller needs to learn how to hear facts that exist outside his own echo chamber of success.  Really, Ben?  You’re going to argue with the founder of Black List about this?  And not understand you’re on the wrong side of the conversations about class, race and inequality?

You might want to work on that brand, beyond being strategic with your publicist.