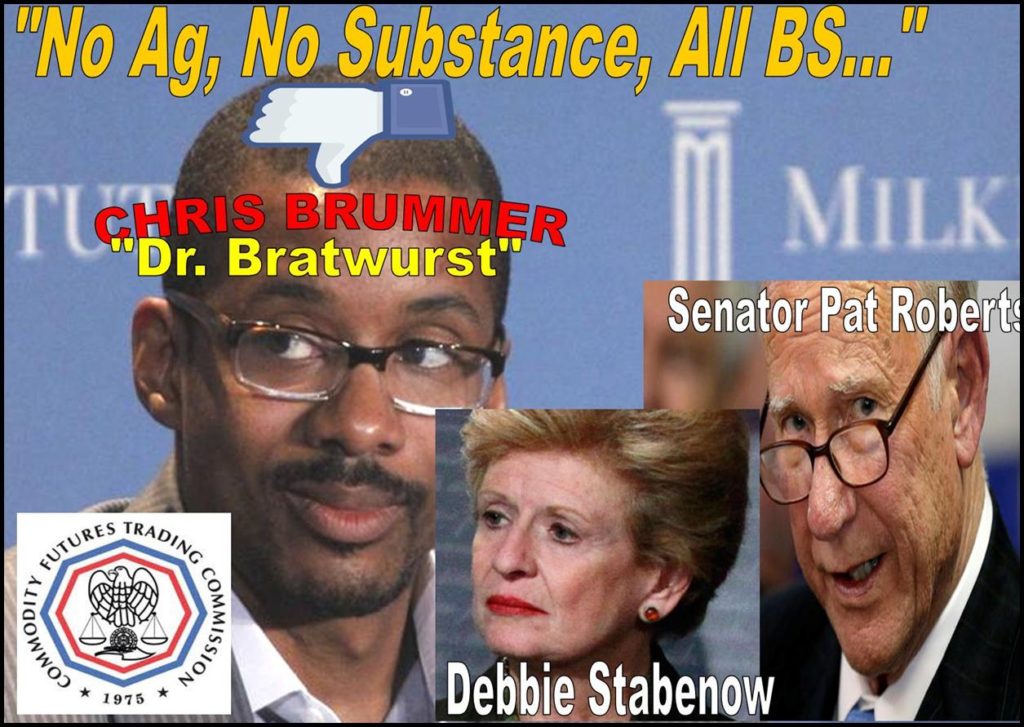 WILL SENATOR PAT ROBERTS HONOR HIS OWN WORDS, PROTECT THE AMERICAN FARMERS?

“…we must make sure CFTC nominees have a solid understanding of agriculture and prioritize the folks who use the futures and derivatives markets to manage risk.”

Senator Roberts’ well-defined statement sure sounded like a eulogy or a death nail to the CFTC nominee Chris Brummer, a notorious Georgetown Law professor with zero experience or background in agriculture, let alone “solid understanding of agriculture” required by Senator Pat Roberts. For the sake of America’s farmers, the honorable Senator Roberts should turn the Dr. Bratwurst Chris Brummer into “burnt meat” by dumping this highly unqualified CFTC nominee.

“In nominating Chris Brummer to the CFTC, criminal Milken’s money and the Democratic Party’s long established tradition of “pay to play” have reached the stratosphere.”

Ironically, the CFTC is a government body that is supposed to protect America’s farmers from trading manipulation. It is breathtaking that Chris Brummer’s boss and mentor Michael Milken was sent to 10 years in prison for the same crimes CFTC would want to prevent.

“In a highly conflicted relationship between Chris Brummer and the CFTC, the ‘fox guarding the henhouse‘ is in play.”

Also hidden from the Senate Agriculture Committee is the fact that Chris Brummer’s boss Michael Milken was investigated by the SEC in 2015 for violating his life time bar from the securities industry. The SEC investigation into Milken also implicated Chris Brummer, which led to record fines, according to an announcement from the SEC enforcement. Reported by Fox News and the Fortune Magazine, the duo were caught by the SEC for “failing to disclose conflict of interest.”

By law, the CFTC should be led by agricultural industry experts – not a highly unqualified imbecile like the Dr. Bratwurst Chris Brummer – a political hack deeply embroiled in the Michael Milken criminal fraud.

“Admittedly, Chris Brummer has zero experience  in agriculture. He has never worked a day on a farm. He has a notorious reputation that stinks like a dead rat due to a long list of sexual affairs, lies and fraud allegations against him.”

On September 15, 2016, the Senate Agriculture Committee chaired by the highly regarded Republican Senator Pat Roberts (R-Kansas) held a hearing to examine Chris Brummer. In front of a C-SPAN TV camera, Chris Brummer swept like a skunk in the gutter: the man was visibly nervous and shaken. Truth be told: Chris Brummer was deeply worried…

Senator Pat Roberts: “Mr. Brummer, you have published an article that berated CFTC regulations. Why do you want a job as a CFTC regulator?”

Chris Brummer: “Thank you for noticing my great academic work! I have since changed. I am a new man now.”

Would drinking beer and grilling Bratwurst sausages in Arkansas qualify Brummer as a CFTC regulator? Obviously not. To cover up a fast sinking rabbit hole, Chris Brummer started with a self-introduction which frustrated the audience with more questions than answers.

Chris Brummer: “I have ag experience! I grew up in a farm in Arkansas helping my folks raising animals. I also chased wild boars… In fact, I slept with hogs…I know them well.”

When asked about policies in dealing with European commodity regulators who resist U.S. trading rules, Chris Brummer’s answer was “to the point”: “I will talk to them!”

“Anything else?” asked a puzzled Senator.

During the hour-long hearing, Brummer cleverly dodged questions of any substance – because he had no substance! Brummer’s answers were stiff, uniform and appeared to have come out of the same rear end, played like a tape recorder: “Well, that’s a key concern… I have no idea now. But I will tell you what to do after I get confirmed…”

Anything else from Dr. Bratwurst, the CFTC nominee Chris Brummer? Nothing. That’s about it.

When a CFTC nominee is so shockingly unqualified as Chris Brummer, a train wreck is hitting America’s farmers hard in their pockets.

“If voters and farmers truly want to improve their living standards and gain better pricing for their products, Chris Brummer is the man who will deliver just the opposite.”

Chairman Pat Roberts said after the hearing that he doesn’t know when the panel will vote on whether to advance the nominees to the full Senate.

Is Senator Roberts a man of his words? “No ag, no CFTC nominee?”